A network of physical and statistical models to design and monitor the ageing of bus batteries on Businova hybrid.

Between a third and the half of an electric city bus is due to the batteries. Thus, there life expectancy strongly impacts the economic reliability of a concept or a vehicle fleet. The designer and the operator are thus facing a risk of the same nature, even if the terms differ.

Phimeca designed a method to anticipate the life expectancy of a bundle of batteries. It relies on a system scale physical simulation of the ageing and a probabilistic modelling of the variability of the leading factors. The physical model includes in particular a thermal part (exchanges between the battery and its environment, air conditioning and regulation) because the battery temperature plays a critical role: an increase of 10°C doubles the ageing speed. The model predictions are continually updated thanks to the data collected during the operation stage. These developments contribute to the conception of the bus hybride Businova (Girard, Yalamas, and Baudin 2018; Girard 2019).

The model of thermal exchange and the air conditioning and heating system was designed using the ThermoSysPro développée par EDF open source library. Phimeca signed a partnership with EDF R&D in 2020 around the development of ThermoSysPro.

The figure below represents battery ageing simulations in two cities in France. The impact of the locality on life expectancy is significant compared to the variability induced by the design (modeled from a heterogeneous corpus of experiments) and climatic (stochastic model of ambient temperature) hazards (modeled from meteorological data). France). Phimeca has also designed an algorithm to continuously update the life expectancy prognosis of batteries in operation by Bayesian inference. 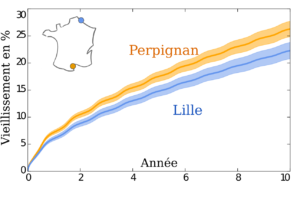